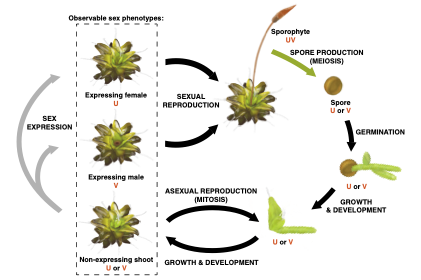 Premise: In dioicous mosses, sex is determined by a single U (female, ♀) or V (male, ♂) chromosome. Although a 1 : 1 sex ratio is expected following meiosis, phenotypic sex ratios based on the production of gametangia are often female-biased. The dryland moss Syntrichia caninervis (Pottiaceae) is notable for its low frequency of sex expression and strong phenotypic female bias. Here we present a technique to determine genotypic sex in a single shoot of S. caninervis, and report results of a case study examining genotypic and phenotypic sex ratios. Methods: We reanalyzed 271 non-expressing gametophyte shoots from a previous study on S. caninervis sex expression across microhabitats using a restriction fragment length polymorphism (RFLP) method. Results: We recovered a genotypic sex ratio in non-expressing shoots of 18.4♀ : 1♂, which exceeds the female bias of the phenotypic ratio (5.3♀ : 1♂; P = 0.013). We also found that the distribution of male and female genotypes across microsites with different levels of sun exposure was not predicted by patterns of sex expression in these microsites. Discussion: These findings contribute to our understanding of how the environment may modulate sex ratios in S. caninervis, either through its direct influence on sex expression or through selection on genotypes with particular sex expression phenotypes.